SecuBox creates an encrypted volume that looks and feels like another Windows Mobile storage card. Data encryption happens automatically - files are encrypted on-the-fly when they are written to the encrypted card, and decrypted when read from the card. With its seamless integration into day-to-day routines, SecuBox becomes an optimal choice for busy professionals who need efficient solution to their mobile security needs. Encryption key backup, file wiping compliant with the U.S. DoD 5220.22-M specifications, command line support and many other features will satisfy corporate environments and more demanding users.

SecuBox 1.4 is currently available in English and Japanese languages. Aiko Solutions offers a fully-functional 30 day trial at no cost, and it can be downloaded from www.aikosolutions.com. A single-user license can be securely purchased online at only USD 39.95. Volume discounts and academic pricing available.   (Source: Press Release)
Posted Thursday, December 13 2007 by ChrisD
Rating: 3.57 Comments () 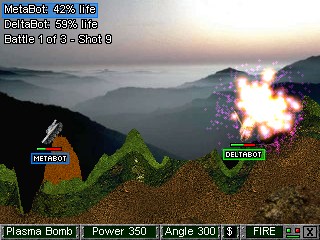 Atomic Cannon 3.0 has been released. The game is available to try or buy for Windows Mobile Pocket PCs, Smartphones, and Windows and Mac desktop PCs for $19.95. This scorched earth type game is easy to learn but difficult to master. In this strategic tank artillery duel you battle against computers or friends on 25 different landscapes. Players take turns aiming and firing at each other with over 100 weapons of mass destruction including nuclear bombs.  Atomic Cannon is produced by Isotope 244 who has released another popular real time strategy game Machines at War.

Spb Software House, a leading Windows Mobile software vendor, releases Spb Wallet 1.5, a secure and manageable storage of sensitive information. Pocket PC and Smartphone users can safely keep passport and account numbers, access and PIN codes, logins and passwords in Spb Wallet, access the data from desktop PCs, and have it synchronized among multiple mobile devices. Spb Wallet puts an end to keeping the most sensitive information exposed on SIM-cards, in address books, and in text files.

Spb Wallet keeps all information encrypted using an AES 256bit algorithm, recommended by the US Government for secret and top secret information. A special Logon Panel and features like automatic clipboard cleanup and auto-lock, protect data against potential attacks.

Spb Wallet consists of a Pocket PC or Smartphone program, a companion desktop PC program and a synchronization module. The desktop application has all the features of its Windows Mobile counterpart, and the ability to import data from other wallets, and also a special Internet browser toolbar, that saves time in surfing restricted access websites. Spb Wallet is easily kept synchronized between home and office computers and notebooks, and Windows Mobile devices.

Spb Wallet is currently available in Czech, English, German, and Russian. Spb Wallet is compatible with Windows Mobile 2003 and 5.0 for Pocket PC , Windows Mobile 6 Professional and Standard devices, Windows Mobile 5.0 for Smartphones, as well as Windows 2000/2003/XP/Vista on desktop. A free 15-day trial can be downloaded, or Spb Wallet can be purchased for 29.95 USD, at www.spbsoftwarehouse.com. Users of other wallet-type programs are welcomed to use the Spb Wallet migration tool for importing data.  (Source: Press release)


What Is Wrong With Windows Mobile Converged Devices

What I don't enjoy is that all of these features don't really play that well with each other. One of my daily rituals is to wake up before everyone else, grab a cup of coffee and read my bible for a while. About three years ago, I stopped doing that with my Pocket PC. To be sure, I still use Laridian PocketBible quite a bit, mostly for research and when traveling, but in the mornings, I can't concentrate for all of the popup toast telling me I have another new message. Many of my co-workers are in time zones that make emails from 4-7am pretty common. I don't want to turn my phone off, I want those emails coming in, and I just don't want to be notified of every one of them at that time of the morning. So I actually went out and purchased a paper bible to match a translation I have been using on my Pocket Bible for several years. I got another one for Christmas this year, and right now, I have to admit that paper feel has something about it lacking in the digital version.  (Source: Ed Hansberry, Pocket PC Thoughts)
Posted Tuesday, December 11 2007 by ChrisD
Rating: 2.66 Comments ()

The PalmInfocenter software store is giving away FREE copies of iambic's Agendus personal information manager for Windows Mobile today. You read that correctly -- all day (December 11th) we are giving away a full version of Agendus for Windows Mobile Pocket PC and Smartphone devices at no cost. Read on for the details.   (Source: PalmInfocenter)
Posted Tuesday, December 11 2007 by ChrisD
Rating: 3 Comments ()

Copyright 2004-2010 Chris De Herrera, All Rights Reserved
A member of the Talksites Family of Websites
All Trademarks are owned by their respective companies.