Omega One, a leading provider of utility applications for Pocket PC, Smartphone and BlackBerry devices is pleased to announce major new versions of two of it's most popular products - Battery Pack Pro and 1-Calc for Pocket PC.

The ultimate utility product for the Pocket PC, Battery Pack Pro was the #1 selling Pocket PC application for two straight years. v3 adds more features to make it truly "The Only Utility You Will Ever Need".
For more information, see www.batterypackpro.com, or www.omegaone.com.

1-Calc has been the #1 selling calculator for the Pocket PC since its release in 2004, and v3 takes the product to a whole new level:

With the addition of the financial, statistical and graphing features (bringing this $30 product on par with $150 calculators), 1-Calc can truly be called "The Only Calculator You Will Ever Need".

Omega One has several leading applications for the Smartphone and Pocket PC including Battery Pack Pro, the number 1 selling Pocket PC application for two straight years. Omega Oneĺs other top selling products Journal Bar, an Internet content viewer, 1-Calc, a universal calculator, and 1-Pass, a physical security application have all been the top selling products in their categories since release. Battery Pack Pro and 1-Calc are also available for Smartphones too, as well as a great game bundle 1-GameBag.  (Source: Press Release)


Enjoy a Night Out with ZAGAT TO GO

BoxWaveĺs Armor CaseÖ form-fitting, trendy aluminum case that is designed to fit your Mio P350 perfectly! Its exterior is made of anodized aluminum that is strong yet lightweight while the interior is padded with a layer of foam for optimal security. While Armor CaseÖ works to protect your Mio P350 from everyday wear and tear, its accessible openings give quick access to display, headphone jack, and center button functions.

WinMobile Lens Pro grasps your device's real time screen at the moment it is activated, and allows you to zoom in any part of the captured screen using pre-defined shapes. The magnified screen can then be scrolled around by dragging the stylus or move around using the navigation keys. By default, releasing the stylus will immediately close the application, but you can set the auto exit feature off which enables you to have more control of the magnified area. Besides shapes, the magnified screen can also be customized to various sizes and zoom factors. You can magnify a spot in your device's screen into a stretched area with actual or smooth interpolated-bilinear pixels.

WinMobile Lens Pro works with any application. You can start the application from the accompanying launcher or associated hardware button.

With WinMobile Lens Pro, you can also capture foreground or background screen and save it into your storage memory.

This new version have more compatibilities and support more devices.

Vsbenchmark 2006 is a free graphic benchmark that test your graphic performance device and compare it with other models. Vsbenchmark boost the limit of the classic 2D graphics with the last visual effect technologies.

You can send or compare your results in our new database with more than 130 models available here :

The benchmark is available for free at this following adresse:

Always on the cutting-edge of practical software development for virtually every platform, LingvoSoft has done it again by announcing the release of the all-new  LingvoSoft Full Text Translators 2006 Available to translate between English and French, Spanish, German, Italian and Portuguese - the team of linguists and developers responsible have outdone themselves once again.

Not only does the new kid on the block deliver instant, accurate and comprehensible translations of business letters, emails and much more - but it does so in an extremely comfortable environment.

Featuring the latest innovations it really does go the extra distance to make life easier in whatever language you choose. The LingvoSoft  team seems to know just how valuable its customerĺs time and energy are and so have done everything to make using a second language second nature. Anyone who checks out the revolutionary new LingvoSoft Translators 2006 will be sure to agree ľ a real winner has arrived.

Learn all about the LingvoSoft Translators 2006 here:

BoxWave releases the Replacement Stylus for Pocket PCs! Ever experience a time when your stylus was lost or missing? Because BoxWave's Replacement Styus is designed to fit in your handheld's built-in stylus holder, you'll never have to worry about being without a stylus again! This is a great solution for replacing a missing stylus and for keeping an extra one at home, the office, or in the car. And for added convenience, the Replacement Stylus has a retractable design!

Check it out the Replacement Stylus!  (Source: Press Release)

A completely new way to share what you discover on your mobile device has just been released.

Thanks to Hubdogĺs new ôBlog itö feature, you can now post to Blogger blogs from Windows Mobile devices. Find interesting News or Podcasts from your Hubdog channels and post them back to your blog within 2 clicks !

This easy blogging & clipping tool brings new possibilities to the traditional, deskbound blogging experience. Here are some cool examples of new innovative ways to use your blogs and your Windows Mobile device:

Every day, my colleague Yuri reads its favorite news and entertainment feeds with Hubdog on its mobile device; clicking on the ôblog itö button every time he stumbles upon an interesting item to post on its blog.

The results: Yuri publishes a stunning blog; well, I personally think so! Why? Because we evolve in the same business and have so many common interests; this is why I find his blog so compelling and extremely interesting.

Yuri also uses his blog as a personal bookmark tool. During meetings for instance, he often refers to his blog posts to point out new suppliers and competitor offers.

Consistently, Yuri uses his blog and Hubdog to record every interesting article he discovers throughout the day.

This feature is an effective new way to share and track news and information anywhere, anytime.

I encourage everybody to use this feature to update and enrich their blogs, whether you need to share relevant business information, hot topics, viral media, fresh news or entertainment with friends and colleagues.

to clip & post media items to a dedicated entertainment blog created for this purpose.

Users can then press the Play button associated with the Hubdog mobile version of this blog; this will start the channel playlist,letting you enjoy a non-stop friendly-suggested media experience.

Share with us more innovative ways to use Hubdogĺs ôBlog itö feature at [email protected]
or by visiting this forum: http://www.hubdog.com/forum/viewtopic.php?p=371#371

- Posts items online or offline.
- Support for the most popular blog site on the web; only Blogger is supported at this time. More blog services to be announced soon.
- Add images and enclosures to your posts.
- Minimal upload bandwidth; text, images and enclosures from a post are not uploaded from the phone,  hubdog server manages this process.
- Send posts while on the road. Be the first to break the news no matter where you are.   (Source: Press Release) 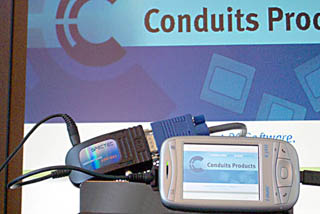 Pocket Slides 2.5 greatly builds on its support for VGA output peripherals for Pocket PC devices. The Dell Axim X50v and X51v units feature VGA-output ability by way of a cable attachment to the bottom of the Pocket PC, is now supported. This is currently the favored way to give a presentation with a Pocket PC, as the "onboard" VGA chip yields the best performance. Other supported VGA solutions include several CompactFlash VGA cards, such as the Colorgraphic Voyager card.

Pocket Slides has new methods to move presentations out of Pocket Slides once editing is finished. The "Export slides" command lets the user export one slide or all slides to either JPEG or PNG image formats. The user also has the option to export "intra-animation" steps in the slide as separate images. For instance, each item in a bulleted list animation would be saved as a separate image.

The new export function is used with the new Spectec SDV-840/841/842 VGA output device. This SD (/miniSD/microSD) card device features a "dongle" which connects to a VGA cable (for a projector) or to an S-Video cable (for a television). The bundled software contains a JPEG viewer, and can load up a deck of images that Pocket Slides 2.5 has exported, and present them on its device, complete with remote control.

Since its release in 2004, Pocket Slides 2 has undergone several internal revisions and been subject to many external tests from beta users. This process has led to the resolution of every bug reported in the Pocket PC installation, and all errors and problems in the conversion process has been fixed in the desktop installation. For example, many PowerPoint 2003 presentations would cause errors (or noncompletion) to occur during the conversion process, and those problems have been resolved. Some presentations linking to external sounds and music were not transferring those sounds to the device, and those presentations are now converting properly. On the Pocket PC, complex timed animations were not being presented properly, and that problem has been fixed. This feature is useful for presentations that are synchronized to music.

Pocket Slides 2.5 is available as a 30-day commercial demo from http://www.conduits.com, where the user can download and evaluate the software.


A new architectural CAD for Windows mobile is released.

Shape CAD draw your plan in a hand and export in 2D or 3D dxf format.

With On PC, software freeware complementary to Shape CAD, you can easily complete your plan, modify your measure and print the work.

Useful for architects, engineer and technician that work frequently out office.